From Heraldry of the World
Your site history : Diocese of Southwest Florida
Jump to navigation Jump to search 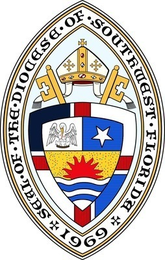 Quarterly azure and argent, a cross gules fimbriated in 1 and 4 argent surtout an escutcheon or, a sun gules rising from water barry wavy argent and azure, a chief per pale gules, a pelican in its piety argent, and azure a mullet reversed argent.

This Diocese was also formed from the Diocese of South Florida in 1969, and the background cross alludes to this. The small shield shows a Pelican which is familiar to the Area, and is also a Symbols of Christ. The Star symbolises Canopus the brightest Star on the southern Skies, and symbolic of the Sewanee Area. The Sun and Waves symbolises the Location on the Shore of the Gulf of Mexico.