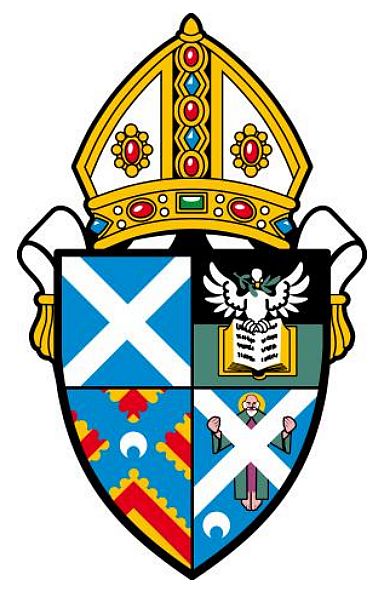 Quarterly: 1st Azure, a saltire Argent [St. Andrews]; 2nd per fess Sable and Vert, an open book Proper in base fore edges and binding Or, a dove Argent her wings displayed in chief perching thereon and holding in her beak a spray of olive Vert [Dunkeld]; 3rd chevronny Or and Gules, a saltire engrailed Azure charged at the fess point with a crescent inverted Argent [Dunblane]; 4th Azure, a saltire Argent supported in front of and by St. Andrew enhaloed Or and vested Purpure with mantle Vert and in base a crescent inverted Argent.

The arms were officially registered in 1961.

The previous arms, used in the late 19th century, but never officially granted, also showed a quartered shield, with in the 1st and 4th quarter the arms of St. Andrews and in the second and third the historical arms of the Diocese of Dunkeld and the Diocese of Dunblane.