From Heraldry of the World
Your site history : Diocese of St. Asaph
Jump to navigation Jump to search 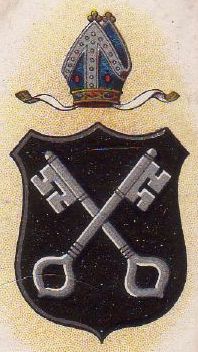 The symbolism of the Keys is uncertain, they are not associated with the Name Saint. But they are found in the Seal of Robert Lancaster Bishop 1411-1433.
Earlier and sometimes later the Keys are replaced by two Croziers.

Literature : Image from Wills's Arms of the Bishopric. McCarthy: Armoria Sedium, E.E. Dorling: Heraldry of the Church a Handbook.