From Heraldry of the World
Your site history : Diocese of Steubenville
Jump to navigation Jump to search 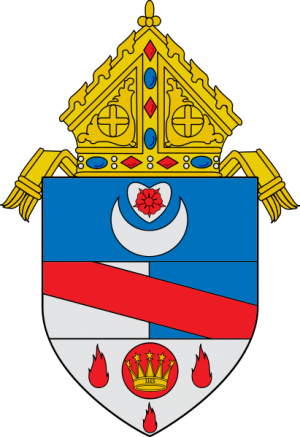 Chief party Azure; fess Ar­gent per pale Azure, bend Gules. Base point Argent. In chief a heart Argent charged with a rose Gules above a crescent Argent; in base a torteaux charged with a celestial crown Or, on the circlet of the crown the letters I H S Sable, between three tongues of fire Gules one in fess, one in nombril, and one in base.

The upper third contains three charges of the Blessed Virgin Mary, patroness of the diocese. This dedication is represented in a field of blue, her traditional color. The silver heart is the Immaculate Heart of Mary. On the heart is the Rose of Sharon, a biblical title for Mary. The silver moon indicates Mary´s Immaculate Conception.

The central shows is the arms of Baron Friedrich Von Steuben, after which the city is named.

The lowest section indicates the spiritual seat or ´cathedra´ of the diocese, the Holy Name of Jesus Cathedral. It is indicated by a celestial crown of gold on a red disc. We see the Holy Name IHS on the crown. The three red pentacostal tongues of fire on a silver field refer to the Church´s evangelical mission (Saint-Luke 12:49).