From Heraldry of the World
Your site history : Diocese of Superior
Jump to navigation Jump to search 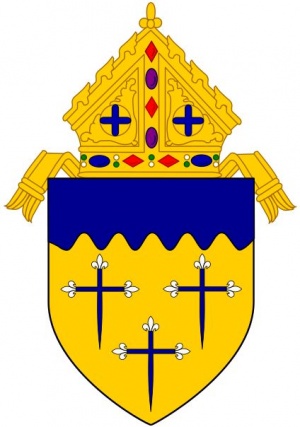 The gold and blue are taken from the French Royal arms (before 1795), as are the fleur-de-lys endings of the cross, to commemorate the first catholic missionaries who came from France to explore the region now known as the diocese of Superior. The number of crosses pint to the Blessed Trinitarity.

The crosses further commemorate the edict of King Charles V in 1736, when he reduced the number of fleurs de lys in the French coat of arms to three in honor to the Three Devine Persons.

The blue chief wavy symbolize the waters of the Lake Superior after which the diocese is named.