From Heraldry of the World
Your site history : Diocese of Venice
Jump to navigation Jump to search 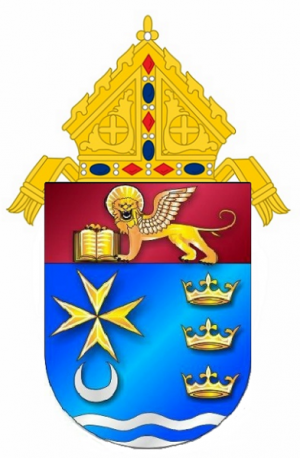 The blue field stands for Mary, Our Lady of Mercy, the co-patroness of the diocese. The cathedral is dedicated to the Epiphany of Our Lord, In heraldry this mystery is traditionally represented by three golden crowns. These symbols represent the three astrologers or wise men who sought the ´new born King´ and came ´to pay homage´ (Mt.2:1-2).

In the Gospel Story the three searchers moved toward a star and eventually ´found the child with Mary His Mother´. Here the star is replaced by a golden Maltese Cross, an artistic proclamation that Jesus. who died on the Cross for us, is Lord and Saviour.

The silver crescent represents Our Lady and emphasizes her spiritual role as Mother of the New Church of Venice.

The wavy blue and silver bars represent the waters of the Gulf of Mexico which borders the diocese.

The red chief with golden winged lion represents Saint-Marc the Evangelist, co-patron of the diocese. This section is intended as a mark of gracious deference to the Patriarchal Church of Venice in Italy. But in the arms of Venice in Florida the pages of the Gospel have no text, but blank pages. For it is a new history, a new story of the relationship between God and His People, that will be written in the hearts in the diocese of Venice-Florida.

The colors also are taken from the (arch-)diocesan arms of Miami and Saint-Petersburg from whose territories the Diocrese of Venice-Florida was formed.