Diocese of Victoria in Texas

From Heraldry of the World
Your site history : Diocese of Victoria in Texas
Jump to navigation Jump to search 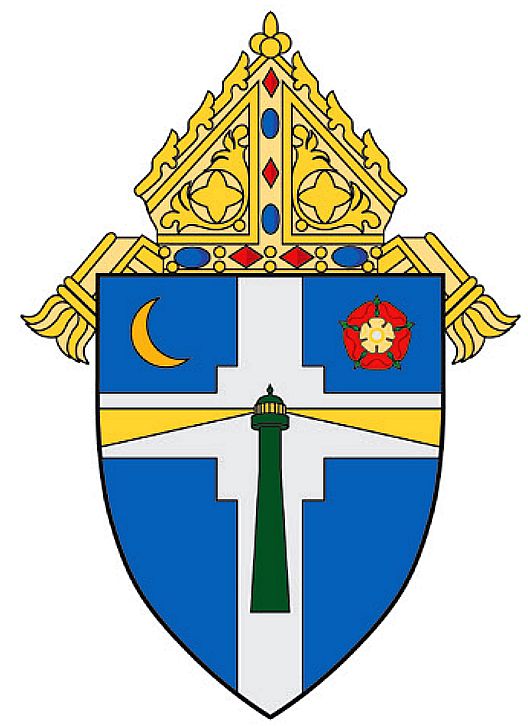 The gold crescent designates the geographic area of the Gulf Coast, sometimes called the Golden Crescent or the Crescent Valley, in which the Diocese of Victoria is located. The red rose honors Our Lady of Guadalupe, naming her special patroness of the diocese. In displaying these two charges together, the shield recalls the traditional image of Our Lady, in which she is seen standing on a crescent moon, hereby acknowledging her gentle dominion over the people of the crescent diocese.

The field is blue, the color of sky and water, to speak of peace and unity, qualities already attributed to the people, and herein established for the diocese. The cross points to the rich tradition of faith brought to the region by European settlers who landed at Indianola where the historic lighthouse still stands. The early Germans, Czechs, Polish, Irish and others joined the Mexican people in making faith and love of family life, attributes that abound even today.

Green, the color of hope, designates the lighthouse as a symbol of hope, while the golden beacon of light stands for Jesus, the Light of the World, calling the people to Himself and illuminating their paths through the darkness. The beacon represents the call to the service of Christ in the Church, through religious life and through family life as well. Just as the city of Victoria, the center of the diocese and the episcopal seat, has been called "The Crossroads," so too the cross can be read as a convergence of paths on which the pilgrim people of God travel to meet Christ, their center.