From Heraldry of the World
Your site history : Diocese of Virginia
Jump to navigation Jump to search 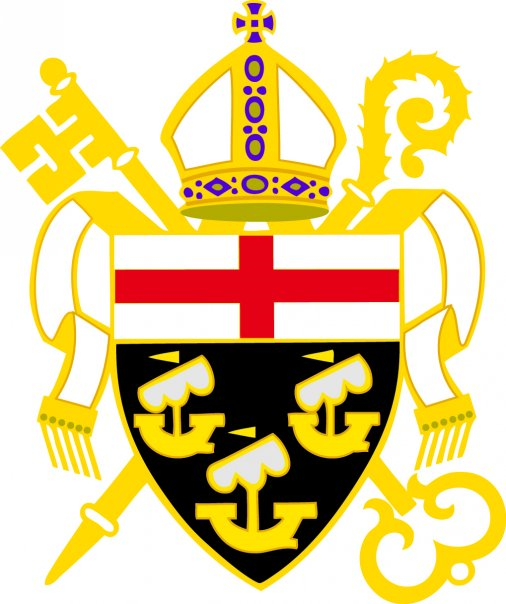 1907: A cross purpure between quarterly 1. Argent three lymphads gules two and one, 2. Or a cross gules, 3. Gules two swords in saltire proper and 4. Vert three keys in pale reversed or.

1971: Sable three lymphads or, on a chief argent a cross gules.

The 1907 Arms was designed by Mrs Margaret Dashiell. The Three Ships symbolize the Susan Constant, the Godspeed and the Discovery who brought the first settlers to Jamestown in 1607. The Cross symbolises the Crhistian faith. The Swords is from the Arms of the Diocese of London, which in Colonial times held Religious jurisdiction in the Area. The Keys are from the arms granted by the Pope to an ancestor of Bishop Robert Atkinson Gibson (sixth Bishop of Virginia 1902-1919), who commissioned Mrs Dashiell to design the 1907 Arms and Seal.

In 1971 Colonel Harry D. Temple redesigned the Arms now showing only the Ships as a reminder of the early Settlers and a chief with the Red Cross on White indication Anglican Heritage. Unfortunately this Arms is nearly identical to that of the Anglican Diocese of the Windward Islands which has the same chief but silver lymphads on a blue field.