From Heraldry of the World
Your site history : Diocese of West Missouri
Jump to navigation Jump to search 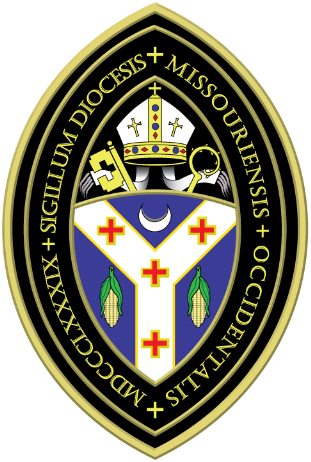 Azure, between, in chief , a crescent argent, and in flanks, two pendant ears of maize leaved and slipped or, a pairle of the second, theron four crosses gules.

The four red crosses symbolizes the anglican heritage and the pairle (Y-shape) symbolizes the conflunce of the Missouri and Kansas Rivers at Kansas City, the See city of the Diocese.The Crescent is from the State Seal of Missouri and also symbolize the Blessed Virgin Mary. The Ears of Maize stand for the farming in the diocesean Area. The Coat of Arms was designed by Pierre de Chaignon LaRose and adopted in 1909.