From Heraldry of the World
Your site history : Diocese of Youngstown
Jump to navigation Jump to search 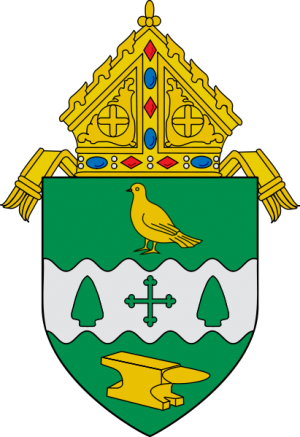 The golden dove in chief is in honor of the patron Saint of the cathedral and also taken from the arms of Pope Pius XII (where the dove is silver) who created the diocese in 1943.

The golden anvil in base symbolizes the industrial landscape that has dominated much of Northeastern Ohio.

The silver wavy bar symbolizes the River Mahoning which flows through the city of Youngstown. The river's name is taken from a native American word that means ¨at the lick¨ where the tribes settled. Two arrowheads, again representing the first residents of the area, flank a cross which was taken from the arms of the Diocese of Cleveland, from which Youngstown was formed, symbolzign the faith that is passed on from one Christian community to another and from generation to generation.

The use of the color green is not further explanated, not for the filed and not for the arrowheads and crosslet.

Literature : document on the diocesan web with remarks of Hans van Heijningen