From Heraldry of the World
Your site history : District Command Vestlandet, Norwegian Army
Jump to navigation Jump to search 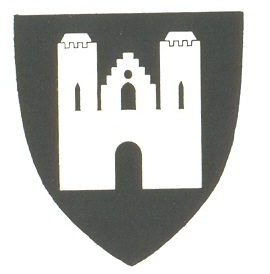 The Fortress is indicative of the Bergenshus Fortress in the City of Bergen where the Command Hq was located. Balck and White is the old Hanseatic Colours sumbolising the Strong Ties Bergen had with the Hanseatic League. The District Command is now disbanded.