From Heraldry of the World
Your site history : Douglas
Jump to navigation Jump to search 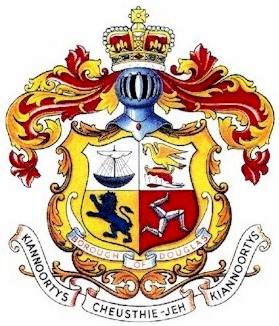 The arms were officially granted on March 2, 1896.

In the dexter chief corner, an old Viking Ship is placed; in the adjoining quarter the Eagle and Child, representing the Arms of the Derby family. Immediately under the Viking Ship is placed a Lion Rampant, representing the Arms of the Athole family; and in the quarter adjoining, the Three Legs of Man ungartered, the whole being surmounted by the Monarchal Crown of Her Majesty the Queen, as Lord of Man.

Underneath is a scroll with the words "Borough of Douglas", and another scroll containing the words in Manx Kiannoortys cheus thie jeh Kiannoortys, which, in English means Government within a Government, the Latin being Imperium in Imperio.