From Heraldry of the World
Your site history : Dublin
Jump to navigation Jump to search 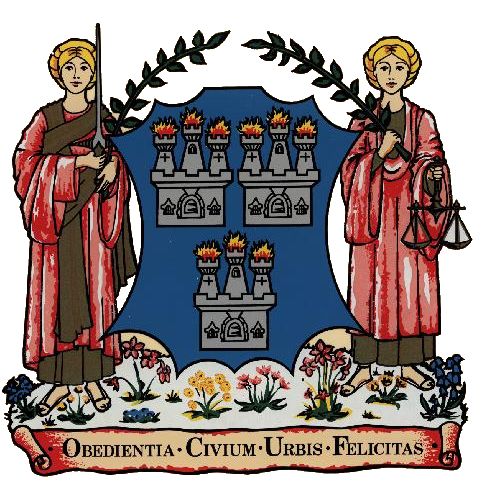 The arms were officially granted in 1607 to the city council and were continued by all subsequent local government councils and corporations.

The castle of Dublin first appears in the 13th century seal of the city. On the seal Dublin is clearly under siege, from the central tower two sentries sound the alarm, while on each flanking tower stands an archer with a cross-bow. It probably depicts the readiness of the citizens, not an actual siege.

Later, the single tower was replaced by three different castles, the small figures were replaced by flames from the towers. The fire indicates the zeal of the citizens in defence of the city. The left supporter is the figure of Justice holding a pair of scales, the right supporter is the figure of Law holding a sword. Both hold an olive branch. At their feet are groups of flowers symbolising hope and joy.

The motto can be translated as :"Happy the city where citizens obey".

An interesting variant is shown in the German Wappen-Album from around 1914, where the arms of Ireland as shown as the arms of Dublin:

Literature : Information leaflet provided and issued by the City of Dublin