From Heraldry of the World
Your site history : Duchy of Braunschweig
Jump to navigation Jump to search 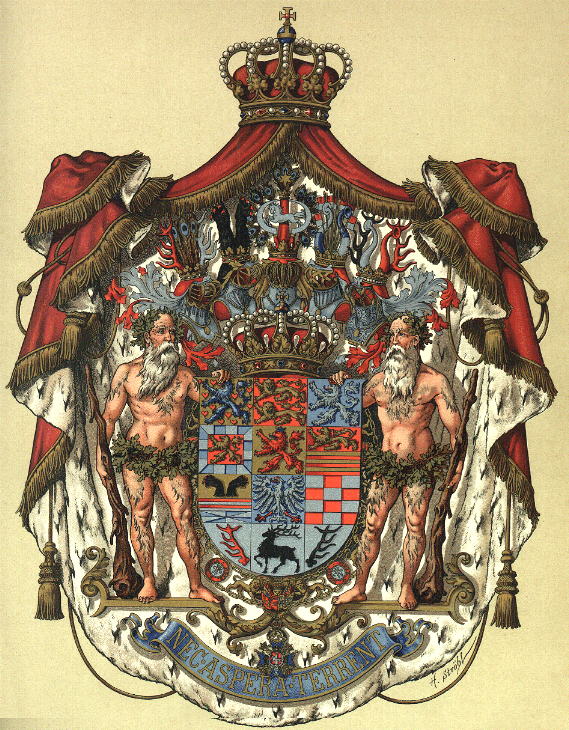 The Duchy of Braunschweig existed until 1918.

The above arms are the large arms of the Duchy, as used from the late 19th century until 1918.

The arms show the following elements :

Above the arms are five helmets with the following crests (left to right) : Alt- and Neu-Bruchhausen, Hoya, Braunschweig-Lüneburg, Hohenstein combined with Lauterberg, and finally Diepholz combined with Regenstein and Blankenburg.

Around the shield hangs the chain of the Ducal Order of Heinrich der Löwe, founded in 1834 by Duke Wilhelm.

The small arms of the Duchy were of a much simpler design, showing only the combined arms of Braunschweig and Lüneburg, with the chain and motto. The additional motto around the shield is the motto of the Order.

To make things more complicated, the Dukes also used another variation of the large arms, incorporating the old silver horse of Niedersachsen to the arms. This horse was placed as an escutcheon on the 5th field. This resulted in the move of the two arms of Diepholz (V and VIII) to positions VIII and XI. The deer of Klettenberg was then removed from XI to X and the two deer antlers of Regenstein and Blankenburg were combined in XII. These arms, however, were less used than the arms above. The corresponding small arms only showed the silver horse of Niedersachsen, with a ducal crown.

The arms with the two leopards and the lion in a field with hearts are the combined arms of the Ducal family Braunschweig-Lüneburg. The old arms of the Dukes of Braunschweig date from the 12th century. Heinrich der Löwe (Henry the Lion), married in 1168 Mathilde of England. The two leopards are derived from the arms of England, with only one lion less.

The lion of Lüneburg is derived from the arms of Denmark, as Wilhelm, Duke of Lüneburg married in 1202 Helene, Princess of Denmark. The two arms were combined in 1367 when Duke Ludwig of Braunschweig married Duchess Mathilde of Lüneburg.The other fields in the large arms refer to the territories that the dukes acquired or to territories to which they claimed rights.