From Heraldry of the World
Your site history : Dumfries
Jump to navigation Jump to search 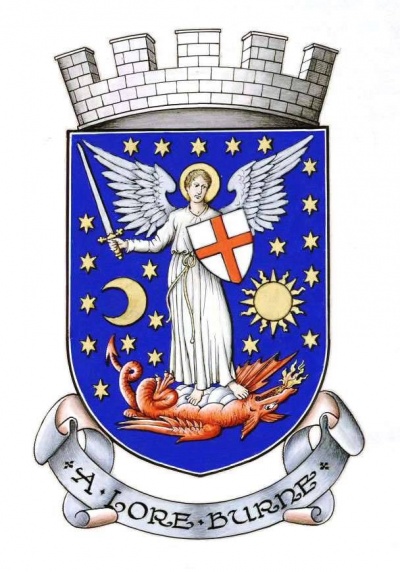 Azure, semee of estoiles Or, standing on a cloud the figure of the Archangel Michael, wings expanded, brandishing in his dexter hand a sword over a dragon lying on its back in base with its tail nowed fessways all Proper, on his sinister arm an escutcheon Argent charged with a cross Gules; in dexter flank an increscent, in the sinister flank the sun in his splendour of the Second.

Above the Shield is placed a mural coronet suitable to a Royal Burgh and under the same this Motto "A Lore Burne".

Dumfries is a Royal Burgh of King William the Lion, dating from about 1186.

The arms are taken in almost complete detail from a Burgh seal, of which a fourteenth century impression is known and of which the matrix was discovered in 1910. St. Michael is the patron saint of the Burgh and the scene on the shield recalls the Archangel's triumph over the great red dragon (Revelation I2 :3-4).

The Scots motto is the old mustering cry of the Burgh and means "To the Lower Burn".