From Heraldry of the World
Your site history : Echternach
Jump to navigation Jump to search 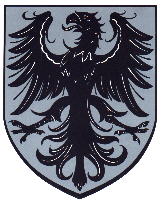 The arms were granted on November 10, 1818 by the Dutch College of Arms (Luxembourg was ruled by the King of the Netherlands as Grand-Duke of Luxembourg at the time) and confirmed on December 31, 1838 by the Belgian King.

The arms have not officially been granted by the Luxembourg government.

The eagle has been used on the seals of the city since Medieval times. The origin of the eagle, however, is not known.