From Heraldry of the World
Your site history : Edward Michael Deliman
Jump to navigation Jump to search 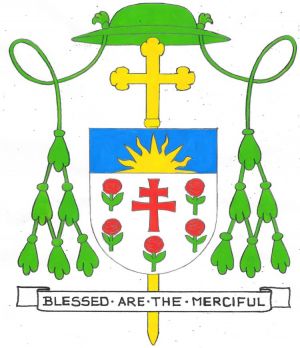 Argent, a Cross patriarchal gules between five roses of the last slipped vert, on a chief azure a sun rising Or.

Tthe Patriarchal Cross is taken from the coat of arms of Slovakia, and has been used as a symbol of the Slovak nation for centuries. All of Bishop Deliman's grandparents immigrated to the United States from Slovakia.

Bishop Deliman's baptismal patron, Saint Edward the Confessor, ruled as King of England from 1003 to 1066. His alleged arms are traditionally depicted as a Cross flory surrounded by five small birds called martlets. To recall Saint Edward, Bishop Deliman places the Slovak Cross on his shield amid five small charges as well. Here the charges are five roses, traditional symbols of Saint Rita of Cascia (1371-1447), an Italian Augustinian nun whose powerful heavenly intercession is widely sought in difficult and desperate need. Bishop Deliman has promoted devotion to Saint Rita for many years, after having received extraordinary help for a family member through her intercession.

Bishop Deliman has served the Archdiocese of Philadelphia as a priest since his ordination on May 19, 1973, and for 38 of those 43 years he has ministered primarily to Spanish­ speaking Catholics in various parishes. The Hispanic population of the archdiocese is diverse, coming from virtually every part of Latin America, and although there is no one symbol to represent all of these cultures, many Latin American nations include the sun in their flags and coats of arms. Bishop Deliman displays a rising sun on a horizontal bar at the top of the shield (the chief) to recall his ministry to Hispanics in the archdiocese.

The rising sun also alludes to the fact the Bishop Deliman's ordination a bishop falls during the Extraordinary Jubilee of Mercy convoked by Pope Francis. In the canticle known as the Benedictus (Luke 1:68-79), Saint Zechariah prophesies that his newborn son, Saint John the Baptist, will announce the salvation and forgiveness that Christ will bring "through the tender mercy of our God, when the day shall dawn upon us from on high" (v. 78). The same theme is echoed in the motto on the scroll below the shield, the first words of the Fifth Beatitude: "Blessed are the merciful, for they shall obtain mercy" (Matthew 5:7).