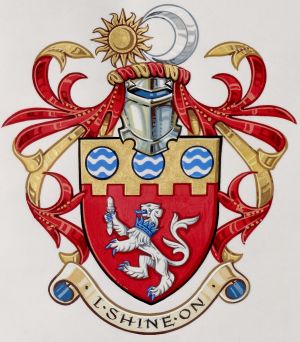 Arms: Gules a Lion rampant Argent gorged with a Crown radiant Azure holding in the dexter forepaw a single pointed Vajra palewise Argent on a Chief embattled Or three Fountains.

Crest: A Sun in splendour Or on the dexter abutting the points of an Increscent Argent on the sinister.

Motto: I Shine On.

The red embattled base alludes to the armiger's paternal clan, namely its ancestral feudal estate and the clan color. It also alludes to his graduate studies in city and regional planning at Cornell University where red is one of the school colors.

The lion or singh is a favorite animal alluding to the armiger's undergraduate studies in zoology, his distaff ancestral roots in South and Southeast Asia where the lion symbolizes India and Farther India, as well as a pun on his Thai surname, Ploysongsang.

The yellow embattled chief alludes to the armiger's family's paternal roots in China since yellow is the metal associated with China.

The three fountains allude to his agnatic descent from Zhu Xi and genealogical connections to Confucius and Yan Hui - founders of modern Confucianism - since water is the symbol of that philosophical tradition. The fountains also represent knowledge in Western symbolism (i.e., the fountain or font of knowledge) and hence allude to the armiger's Western education.

The badge refers to the Ploysongsang surname. In Indic mythology, which greatly influenced Thai culture, the vajra or thunderbolt is also described as a jewel. Together, the crown radiant and the vajra jewel symbolize the surname, which means "brilliant or radiant jewel". These same elements are in the arms as well to tie the badge to the arms, though now with the crown symbolizing level-headed, spoken authority and the vajra representing action and energy.

The crest represent the Chinese word, Ming, which means brilliant. Again, it alludes to the armiger's surname as well as his desire for balance in life.