From Heraldry of the World
Your site history : Ellesmere College
Jump to navigation Jump to search 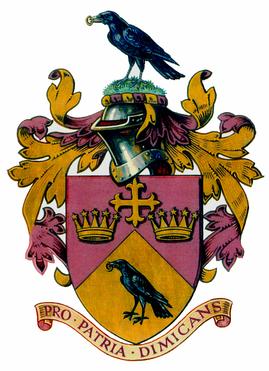 Arms: Per chevron purpure and Or, two celestial crowns fesswise of the last, in chief a cross flory also gold, in base a raven proper holding in the beak a golden annulet.
Crest: On a wreath of the colours, Standing on a mount vert a raven as in the Arms.
Motto: Pro patria dimicans

The shield, crest and motto have all to do with the saintly King Oswald to whom the School is dedicated and who fought a battle at nearby Oswestry.
The celestial crowns represent Oswald's kingship and the heavenly crown gained by him; the cross stands for the cross which the king raised before his victory against the heathen Penda of Mercia at Heavenfield and for Oswald's saintly life.
The colours purple and gold are royal colours. The raven refers to a legend concerning Oswald's coronation, when the chrismatory was accidentally broken. A raven miraculously appeared with new oil, bearing in its beak a letter containing the assurance that the oil had been consecrated by St Peter himself. The ring in the raven's beak refers to the story of Oswald's sending the bird to a heathen princess whom he wished to convert and marry.

The motto, which may be translated STRIVING FOR ONE'S COUNTRY, can also refer to Oswald's struggle to maintain the independence of Northumbria against heathen aggression. The motto was probably chosen by the School's first Custos, Sir Offley Wakeman.