From Heraldry of the World
Your site history : Elmwood school
Jump to navigation Jump to search 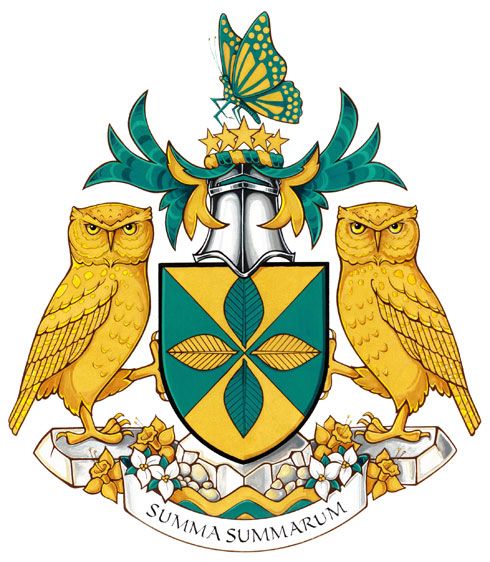 Arms: Per saltire Or and Vert four elm leaves their stems inward counterchanged
Crest: Issuant from a circlet of mullets Or, a female monarch butterfly Vert embellished Or
Supporters: Two little owls (Athene noctua) Or standing on a rocky mount set with daffodils and trillium flowers proper, above barry wavy Or and Vert
Motto: SUMMA SUMMARUM

The colours are gold and green. Gold symbolizes excellence and value, and green symbolizes youth and growth. The elm leaves evoke the once abundant majestic Rockcliffe Park neighbourhood elm trees that are the school’s namesake. The leaves also symbolize strength and growth, as well as the recognition of the importance of our environment. As Elmwood School is a girls’ school, the division of the shield alludes to triangles, an ancient female symbol. The four triangles also represent the four houses of the school. The division of the shield is evocative of an hourglass, acknowledging the inevitable passage of time for students, teachers and alumni. The “X” shape alludes to the cardinal directions, which are essential to the structure of knowing where one has been and which new direction to take. The multiple directions represent the multicultural and inclusive nature of the school, as well as the long history of Elmwood graduates travelling to the corners of the Earth to continue their studies.

The butterfly is a symbol of the soul and the mind, nimble with the ability to travel far, and is a creature that undergoes transformation during its life. After a time of development and growth, butterflies stretch out their wings to fly on their own, a metaphor for the transformative journey of each student as she grows and matures through the years she is at the school. Each spring, Elmwood students release butterflies as part of a beloved tradition in the Junior School. The butterfly rests on a circle of stars, which represent excellence and navigational knowledge, and allude to the school’s motto.

The owls evoke wisdom, intelligence, knowledge and strength. They are also the attribute of Athena, the Greek goddess of the arts, craft and skills. The rocky mount evokes Rockcliffe Park, where the school is located, and the nearby Ottawa River is represented by the waves beneath the mount. The daffodil is the school emblem and it was chosen by Theodora Philpot, the school’s founder. It signifies rebirth and the resilience of nature by heralding the spring every year. In amongst the daffodils are trilliums, the official flower of Ontario.

The motto means “Highest of the high” and was adopted in 1932, after its inclusion in the school song. Elmwood students are encouraged to exemplify this motto by being academically strong, socially adept, confident and resilient young women.