From Heraldry of the World
Your site history : Emily Carr University of Art and Design
Jump to navigation Jump to search 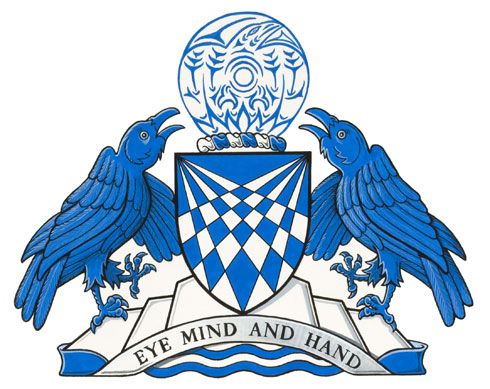 The colours are those associated with the University and its setting. The pattern on the shield is a geometric allusion to perspective, both in its literal sense, as interpreted by artists over many centuries, or in the much wider sense of the different points of view each artist brings to his or her own work. As well, it symbolizes how the various forms of art challenge us to see things in new ways.

The Coast Salish raven styled by Susan Point represents, as it does in many West Coast First Nations cultures, transformation and cleverness. In this instance, it represents Emily Carr’s interest in the First Peoples as well as the idea that the artist transforms materials to give them new shape and meaning and that art can transform the way the viewer perceives the world. The flames symbolize the idea that the University’s professors liberate what burns in each student and what sets them on fire.

The crow is the smaller cousin of the raven, but unlike the raven is at home in urban areas. Here the crows represent the University’s urban setting on Granville Island next to the waters of False Creek. As well, they are noted for their intelligence, and thus symbolize the intellectual quotient in all aesthetic endeavours.

The motto signifies the linking together of the perception and visualization of the world through the eyes, the operation of the artist’s mind in the creative process, and the use of hands to bring an idea to life.