From Heraldry of the World
Your site history : Emmanuel College (Cambridge University)
Jump to navigation Jump to search 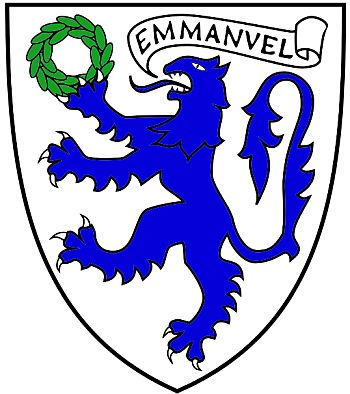 Argent, a lion rampant azure, armed and langued gules, holding in the dexter forepaw a laurel wreath proper, in the mouth a scroll [of the second] inscribed EMMANUEL in letters Or.

The arms were officially granted on January 1, 1589.

Emmanuel College, founded in 1584 by Sir Walter Mildmay are based on the arms of Mildmay (Argent three lions rampant azure) and symbols for the college.