From Heraldry of the World
Your site history : Emmerlinge Series
Jump to navigation Jump to search 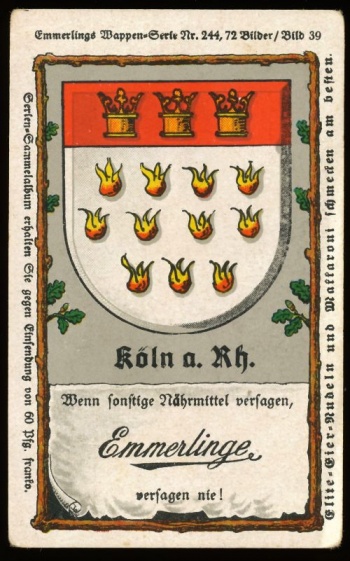 Emmerlinge was a company in Zeitz, Germany, trading in a number of products, including pasta, bakery products, biscuits and more. They isseud a number of series, of which at least three have a heraldic theme. Series 244 and 245 (each of 72 cards) showed German city arms and were probably issued before 1918, although the Köberich catalogue lists them as 1931. The series do show arms of towns in the Elsas region, which became part of France in 1918.
The third series (258) consists of 100 cards and probably dates form the 1930s. This series shows the arms of countries, with flag and landscape.

All series show advertising on front and back. The series can be distinguished as they are numbered on the front and have a different style on the back.

Backs of series 1 are horizontal and over 50 different texts are used. Two examples are shown below. The second and third are vertical and also here many variations are known. Only the third series also shows some text on the country displayed on front.

The following cards are known: