From Heraldry of the World
Your site history : English and American Insurance Company Limited
Jump to navigation Jump to search 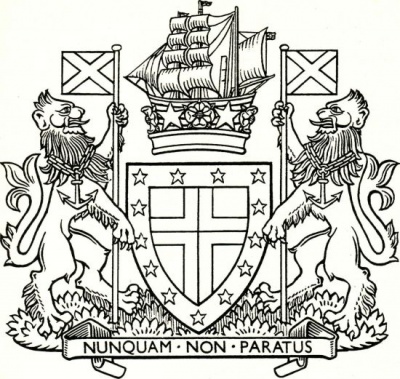 Arms: Quarterly argent and gules, a cross counterchanged within a bordure azure charged with thirteen mullets of the first.
Crest: Within a coronet composed of four roses gules barbed and seeded proper and as many mullets argent set upon a rim Or, upon waves of the sea a representation of the whaler Terra Nova" in full sail proper.
Supporters: On either side a lion Or gorged with a chain gold, pendent therefrom an anchor argent, and supporting a staff proper, flying therefrom a banner also argent charged with a saltire gules.
Motto: Nunquam non paratus.

The arms were officially granted on May 1st, 1957.

If you have any information on these arms and American Insurance Company Limited mail us !