From Heraldry of the World
Your site history : Eppstein (Frankenthal)
Jump to navigation Jump to search 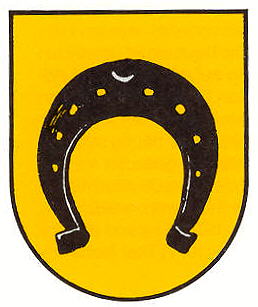 The arms are based on the oldest known seal of the village, known since 1609. The horseshoe, which may symbolize the local tradition of horse breeding, is a common village symbol in the Pfalz region. The colours are those of the Pfalz.