From Heraldry of the World
Your site history : Esch-sur-Alzette
Jump to navigation Jump to search 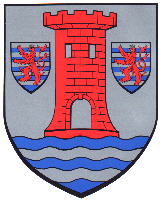 The arms are based on the oldest known seal of Esch-sur-Alzette. It is not known from which time the seal dates, but probably before the 17th century. The seal showed a tower on a base with several waves. The tower was flanked by two small shields with a lion. From the tower emerged a female head.

As no colours were known for this composition, the colours were determined in 1871. The small head was omitted and the small shields, showing only a lion, were replaced by the national arms, with the lion and bars.

The tower probably symbolises the local castle, the waves the Alzette river. The two shields most likely were indeed the arms of Luxembourg.

In 1696 completely different arms were used for the city. These showed St. Rochus, the local patron saint in natural colours. There is no further reference to these arms.