From Heraldry of the World
Your site history : Essendon and District Memorial Hospital
Jump to navigation Jump to search 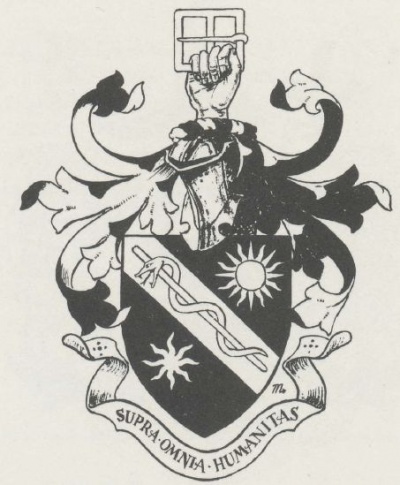 Arms : Azure, on a Bend between a Sun in splendour and an Estoile of eight points Or a Rod of Aesculapius Gules.
Crest : On a Wreath of the Colours, a dexter Hand erect Gules, grasping a square Buckle fesswise Or.
Motto: 'Supra Omnia Humanitas'.

The Rod of Aesculapius, an emblem of the medical arts since classical times, lies between heraldic sun and star to denote the hospital's care and service by day and by night; day and night are re-echoed in the blue and gold colours. In the Crest, a hand grasps a buckle, as an ancient token of faithful service.