From Heraldry of the World
Your site history : Estcourt High School
Jump to navigation Jump to search 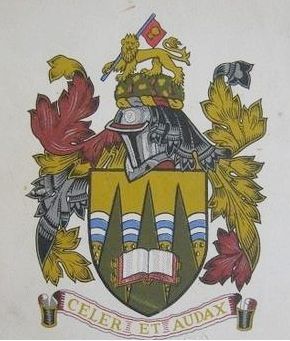 The arms are officially granted as part of a badge, but not as arms specifically.

The open book of learning is the heraldic symbol of an academic institute. The green vertical triangles (or piles) allude to the highest peaks of the Drakensberg - Champagne Castle, Giant's Castle and Mont-Aux-Sources, all of which are visible from the school.
The two wavy white lines allude to the Tugela and Orange rivers, both of which rise in Mont-aux-Sources. The blue dots that allude to the tears of Weenen ('crying') - the scene of a Voortrekker massacre in 1838.

The crest depicts the hill on which the school was built and has decorations alluding to aloe and acacia, plants that are typical of the area. On the hill the English lion holding a flag showing a sheaf of wheat - the symbol of agriculture, a subject pioneered by the school.

The school motto Celer et Audax was also the motto of Colonel A C Martin (the schools founder) old regiment.