From Heraldry of the World
Your site history : Exeter College (Oxford University)
Jump to navigation Jump to search 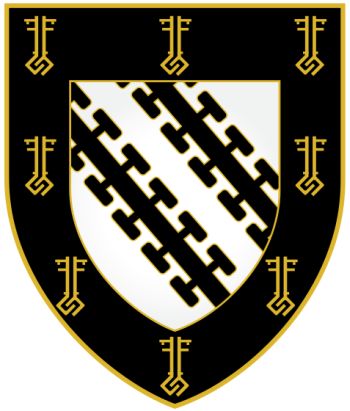 Argent, two bends nebuly sable; a bordure of the last charged with eight pairs of keys endorsed and interlaced in the bows Or, the wards up­wards.

Exeter College was founded by Walter de Stapledon, Bishop of Exeter and was known at first as Stapledon Hall. The College uses Stapledon's arms, argent, two bendlets nebuly sable which are within a bordure sable charged with eight pairs of gold keys. The keys refer to the founder's bishopric of Exeter in the arms of which two gold keys are shown in saltire.