From Heraldry of the World
Your site history : Falmouth Docks and Engineering Company
Jump to navigation Jump to search 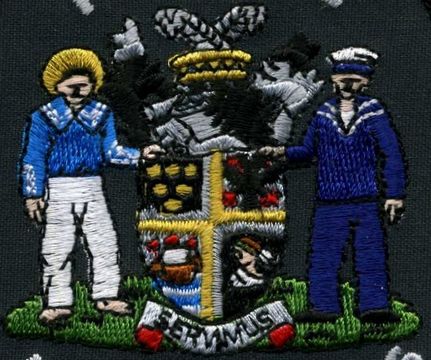 Arms : Quarterly sable and argent, a cross quarterly of the last and Or between in the first quarter six bezants, three, two and one, in the second quarter a double-headed eagle displayed of the first, in the third quarter on water harry wavy azure and argent a three-masted sailing ship, the mainsail set proper, flags flying gules, and in the fourth quarter the head and shoulders of a man couped affrontee, vested about the dexter shoulder argent and wreathed about the temples with leaves vert, tied at the back with ribands also argent.
Crest: On a wreath of the colours, Out of a ship's crow's nest two ostrich feathers in saltire, all proper.
Supporters: On the dexter side a sailor of the Royal Navy of the mid-nineteenth century and on the sinister side a sailor of modern times, both proper.
Motto: Servimus.

If you have any information on these arms Docks and Engineering Company mail us !