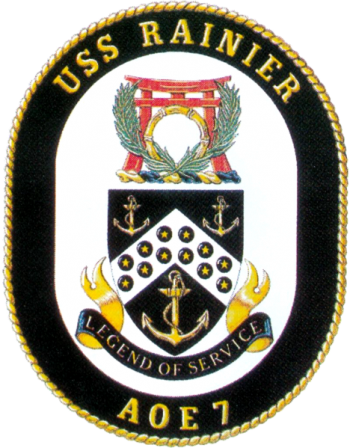 Dark blue and gold are the colors traditionally associated with the Navy. Gold is indicative of honor, excellence, and achievement. The dark blue of the shield stands for loyalty and reflects the sea, the theater of naval operations. White suggests integrity and purity of ideals. Black implies solidity. The chevron, a symbol of strength and support, alludes to the prow of the ship and the peak of Mt. Rainier, the ship's namesake. The black pellets characterize fuel and ammunition pointing to the ship's mission. The pellets are charged with twelve battle stars earned for World War II service in Korea and Vietnam. The three anchors, symbolic of maritime tradition, simulate the past and present ships. Crest: Red symbolizes combat, valor, and zeal. The colors red, yellow and green are the colors associated with Vietnam. The Torii gate recalls service in Korea. The bamboo annulet signifies continuous replenishment operations conducted off Vietnam. The crossed palm fronds represent the ship's extensive service in the South Pacific and portray strength, support, honor, and achievement.