From Heraldry of the World
Your site history : Felipe Ignacio Ortiz-Olave
Jump to navigation Jump to search 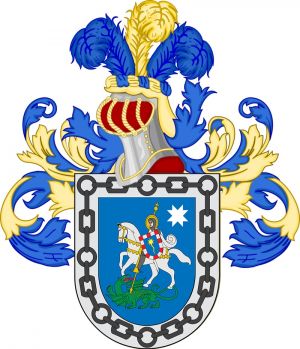 Azure, an guñelve Argent with the image of St. George Martyr the Victorious in complete armour Sable, wearing a flying cloak Argent, riding a horse in full gallop Argent; the latter treading upon a dragon crawling in base Or. Border chains Sable on Argent.

Guñelve (wünelfe in Mapudungun) is a symbol from the Mapuche iconography which can be described as an octagram or a star with eight points. It represents the planet Venus.

Saint George was a Roman soldier of Greek origin and a member of the Praetorian Guard for Roman emperor Diocletian, who was sentenced to death for refusing to recant his Christian faith.