From Heraldry of the World
Your site history : Fermanagh (county)
Jump to navigation Jump to search 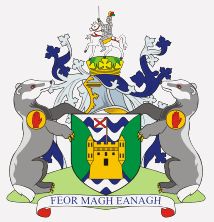 Barry wavy argent and azure, two flaunches vert; over all a representation of the Watergate at Enniskillen Or, flying from the battlements to the dexter a banner of St. Patrick. Crest: Out of a coronet of four shamrocks set upon a rim Or a mount vert, thereon a horse passant argent, caparisoned gules, thereon a knight in full armour, in the dexter hand a sword erect proper [hilt and pomel Or]. Supporters: On either side a brock proper charged on the shoulder with a bezant, thereon a dexter hand couped gules. Motto: Feor Magh Eanagh.

The knight on horseback represents the Maguires who were the ancient Irish chiefs of Fermanagh and have given the county the nickname “Maguire County.” The fortification is Enniskillen Castle which was originally built by the family in the 17th century. The blue and white wavy lines represent Upper and Lower Lough Erne respectively, as well as the many other lakes found in Fermanagh, which have given rise to the other nickname: “Lakeland County.” This is emphasised by motto “Feor Magh Eanagh” which in Irish means “Country of the Lakes.” The green slopes symbolise the fields and forests and combined with white are the county colours. The red hand stands for the O’Neills who were a dominant family in the area. The flag flying over the castle is St. Patrick’s Saltire which along with the red hand represent Ulster and Northern Ireland. The yellow circles represent the Coles who were the Earls of Enniskillen. The badgers refer to the Brookes who have owned lands in Fermanagh since Elizabethan times.