From Heraldry of the World
Your site history : Fingal
Jump to navigation Jump to search 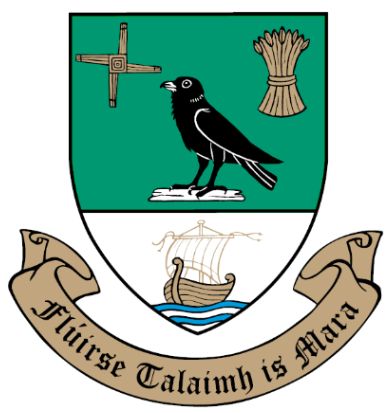 Vert a raven on a hurdle proper, in chief in the dexter a St. Brigid's cross and in the sinister a garb or, on a point enhanced in base argent on waves of the sea in base barry wavy of four azure and of the fourth a Viking longship sail set also proper. Motto: Flúirse talaimh is mara.

The arms show a Viking longboat and a raven (a Norse emblem which appeared on the arms of the old Dublin County Council), both of which recall the Norse settlement of Fingal in the 9th and 10th centuries - the Irish form of the placename, Fine Gall, means "foreign tribe". The emblem in the upper left of the shield is a St Brigid's cross (a small cross woven from straw which is traditional in Ireland) and the sheaf of wheat in the upper right of the shield represents Fingal's position as one of the principal corn-growing areas in Ireland.

The motto (Flúirse Talaimh is Mara) means "abundance of land and of sea" - Fingal contains a number of fishing ports.