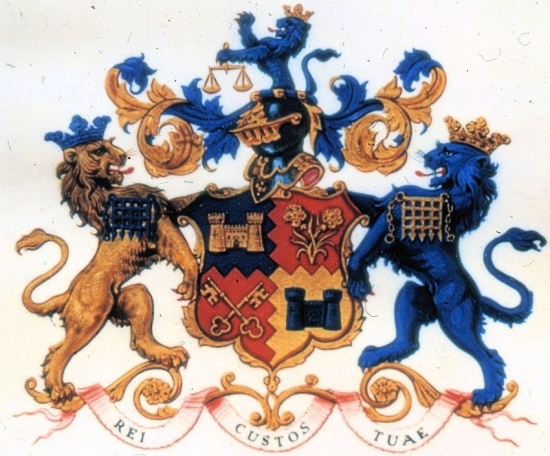 Arms: Quarterly per pale and per fesse indented azure, gules, gules and Or, in the first and fourth quarters a castle counterchanged, in the second a sprig of thrift flowered gold, and in the third two keys in saltire, wards upward, also gold.
Crest: On a wreath Or and azure, A demi lion azure, armed and langued gules, ducally gorged and hold­ ing in the sinister paw a pair of scales Or.
Supporters: On the dexter side a lion Or, armed and langued gules, ducally crowned and charged on the shoulder with a portcullis azure, and on the sinister side a like lion counterchanged.
Motto: Rei custos tuae

The arms were officially granted on September 15, 1961.

If you have any information on these arms Counties Building Society mail us !