From Heraldry of the World
Your site history : Francisco-José Bermejo Fernández-Briceño
Jump to navigation Jump to search 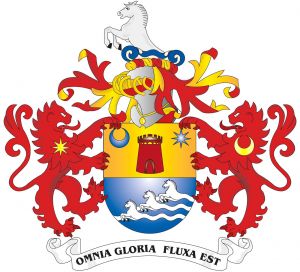 Arms: Per fess Or and Azure in chief a tower Gules between a crescent and an eight pointed star, both enhanced, Azure and in base barry of three three wave-riding horses en echelon from sinister Argent.

Crest: Issuing from the waves of the sea Argent and Azure, a demi-horse salient Argent.

THE MOON.- The increasing and decreasing cycles of the moon symbolize birth, life, death and resurrection. It is a symbol of hope and enlightenment.

STAR OF EIGHT POINTS.- It is the star of Solomon. The number 8 for the Pythagoreans is the symbol of the perfection and regeneration of souls. The 8 represents the endless world; To infinity. Express the will without limits. It is one of the most absolute hallmarks of spiritual realization. The star is a guide image and divine guardianship. In heraldry it is a symbol of the knighthood. Any celestial symbol is associated with royalty. It was used profusely by the knights of the Temple, Malta, Saint John, and Teutonics.

THE TOWER.- The tower is the symbol of power.

THE HORSES OF POSEIDON.- It is a hypercomplex symbol, represented for the first and only time so far in the shield of this part, and composed in turn by different elements worthy of comment: - The sea and its waves.- The sea is a maternal symbol, it represents the bosom of the earth. In him numerous myths of creation are given. It represents the unconscious mind, death and the supernatural. The waves are both constancy and mutability, destruction and regeneration. - Poseidon / Neptune is latent in their horses. He is the Greco-Roman God of the sea, of tempestuous temperament. - Hippocampus - is the emblem among navigators. In heraldry it symbolizes grace and trust, the power of the ocean and safety in travel. In classical mythology they pulled Poseidon's car. In our case, the horses are composed, that is, they are at the same time, mythological animals, sea foam, waves of the deep sea and the will of their owner; Neptune. They are not properly hippocampi, but a triad of terrible horsepower and absolute power. It is a metamorphosis of elements. A unique emblem.