From Heraldry of the World
Your site history : Frauenfeld
Jump to navigation Jump to search 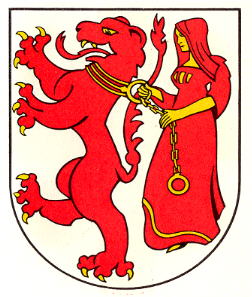 The arms show a lion, representing Habsburg and a canting female figure (Frau). Frauenfeld was first mentioned as a city in 1286 under the Counts of Habsburg, who ruled the city for 2 centuries. In the middle of the 15th century it became part of Austria and a few decades later part of the Swiss Confederation. The arms of Habsburg are a red lion on a golden field.

The female figure probably represents St. Mary, as the village developed in the 13th century on the grounds of the Reichenau Abbey, of which St. Mary was the patron saint.

The composition of lion and female already appeared on the oldest seal of the city from 1286. During the Habsburg rule, the lion and female were separately shown. Only after the Old Zürich War, when the city became part of Austria, the woman is holding the lion on a chain. The arms have not changed since.

The origin of the colours is not known, but may be the Austrian colours.