From Heraldry of the World
Your site history : Melbourne > Heraldry of the world > Category:Institutional heraldry > Fremantle Port Authority
Jump to navigation Jump to search 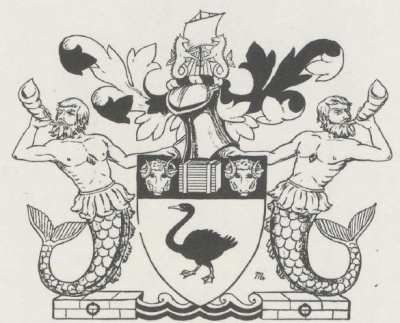 Arms : Argent, a Black Swan proper, on a Chief Azure a Packing Case between two Rams' heads caboshed Or.
Crest : On a Wreath Argent and Sable, the Mast of a Ship, Sail set proper, supported by two Sea Horses Argent.
Supporters : On either side a Triton upon a Compartment of Water flanked by two Quays proper.

The charges are largely self-explanatory: the black swan for Western Australia, the rams' heads and packing cases for industry and commerce, the compartment of water flanked by quays for a port, and the mast, sails, sea horses, and tritons for marine affairs.