From Heraldry of the World
Your site history : Galen Alexander Michael Elijah Ravenscroft
Jump to navigation Jump to search 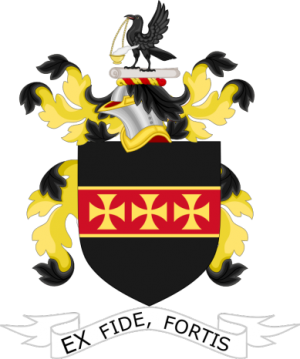 Sable, on a fess Gules fimbriated Or, three crosses formée of the last. For a crest: with mantling sable doubled or, on a torse gules and or, A raven rising, addorsed and elevated, pendant from its beak an open thurible, in its talons a closed scroll, all proper. In a scoll for a motto: Ex Fide Fortis

The sable field represents the quiet of a dark night, both its positive aspects as meditation, and the negative aspects of the unknown. The red fess, fringed in gold, symbolises the bonds of kith and kin holding the armiger together through that unknown, and sharing those experiences—good and bad—with them. The crosses that stud said belt represent the armiger's faith, sprinkled through their life to aid them in getting by.

The crest is a raven, a bird dear to the armiger and symbol of gods they revere, flying forward, cleansing a path with incense while protecting the knowledge contained within the scroll.