From Heraldry of the World
Your site history : Gemmological Association of Great Britain
Jump to navigation Jump to search 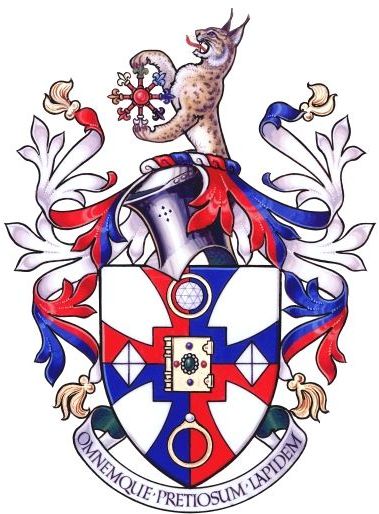 Arms : Argent, on a cross formy-quad­rate throughout quarterly gules and azure a closed book, bound and clasped, Or, jewelled proper, between in chief within an annulet Or a representation of the top plan of a rose-cut diamond proper, in fesse two lozenges argent each charged with a fillet cross sable and in base an annulet Or gemmed argent.
Crest: On a wreath argent, gules and azure, A demi lynx proper holding be­ tween the paws an escarbuncle of eight rays gules each floretty and pommety of a jewel respec­tively from the base of pearl, ruby, jacinth, topaz, emerald, turquoise, sapphire and amethyst.
Motto: Omnemque pretiosum lapidem.

The arms were officially granted on February 20, 1967.

The arms show a red and blue cross, the colours taken from the arms of the Worshipful Company of Goldsmiths and the National Association of Goldsmiths of Great Britain and Ireland. The type of cross suggests depth and thus looks like a precious stone looked from above.

The diamonds and the ring clearly indicate the use of gems in jewelry. The upper part shows a rose cut diamond inside a ring, suggesting the scrutiny of gems by magnification under a lens. The gold jewelled book is a symbol for study and teaching.

The crest shows an heraldic lynx, renowned for his keenness of sight and perception, and in ancient times was credited with the legend that a lynx could see though opaque substances and is thus used here as a symbol for a lapidary or student scrutinising every aspect of gemmology.

The lynx holds an escarbuncle, an heraldic emblem, but derived from a medieval term for very bright jewels. The fleur-de-lys at the points of the escarbuncle are shown in different colours to represent the different colours of the spectrum and the bright colours of precious stones. The silver centre represents a pearl. This is a unique treatment of the escarbuncle which, with the lynx holding it carefully, represents the aims and activities of the Association.

The motto - Omnemque Pretiosum Lapidem - is taken from the Bible in 1 Chronicles: 29, 2 and can be translated as "I prepared all manner of precious stones".