From Heraldry of the World
Your site history : Genève
Jump to navigation Jump to search 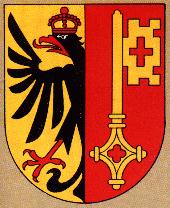 The oldest use of the arms of Genève dates from 1342, when the vicar of the St. Peter Cathedral used arms with two crossed keys (the symbol of St. Peter) and an eagle (the Imperial eagle). It is assumed that the city used arms already a century earlier, but there is no historical evidence thereof.

Whether the arms from 1342 were used by the Cathedral only, or the whole city is not clear, the resemblance, however, is rather great. In the 1440's the arms with eagle and key appear regularly, and are identical to the present arms. The oldest colour image dates from 1451 and shows the present colours.

The arms never really changed, except between 1792-1815. In 1792, at the French Revolution, the city joined the Revolutionists and removed the imperial crown from the eagle. Unlike most 'liberated' territories, the arms remained in use. In 1804 Napoleon issued new arms of cities, and Genève received its old arms, with three bees in the upper part as a symbol of a city of the First Order. The imperial crown was again omitted.

In 1814, when Napoleon was defeated, Genève joined Switzerland and restored the old arms. The arms of the Canton of Genève are basically the same as the arms of the city. with the exception of the crest.