From Heraldry of the World
Your site history : General Accident Insurance
Jump to navigation Jump to search 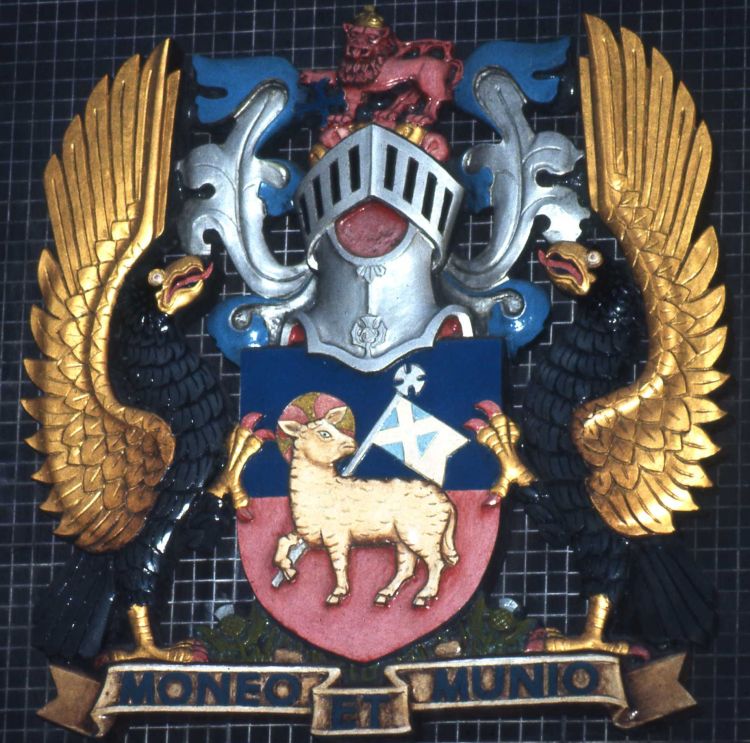 Per fess Azure and Gules a holy lamb passant reguardant staff and cross Argent with a banner of St. Andrew proper. Above the shield is placed a helmet befitting their degree with a mantling Azure doubled Argent and on a wreath of their liveries is set for a crest a lion passant guardant Gules imperially crowned Or supporting with his dexter paw a cross moline Azure in pale. On a compartment below the shield with this motto " Moneo et Munio " are set for supporters two eagles Sable wings elevated beaked and membered Or armed and langued Gules.

The arms were officially granted in 1931.

The lamb represents the " Holy Lamb " (Agnus Dei) and is taken from the arms of the City of Perth, where the Head Office of the Corporation is situated. In addition it has reference to the martyrdom of Scotland's Patron Saint, St. Andrew, whose cross the lamb is carrying.

Above the shield is a helmet facing the front, the correct type used for Scottish Corporations.

The lion on the crest forms part of the Arms of the Earl of Airlie, who was, at the time the arms were granted a Director of the Corporation. The moline cross alludes to the arms of Sir Francis Norie-Miller, the General Manager at that time, who subsequently became Governor of the Corporation.

The eagle supporters have a double significance. They indicate the Corporation's large interests in the United States, and also refer to the City of Perth, whose Arms have eagle supporters, an allusion to the Roman period in the City's history.

The base upon which the arms are standing contains thistles, a further reminder of Scottish origin.

The motto is loosely translated as "Advice and protection."