From Heraldry of the World
Your site history : George Washington University
Jump to navigation Jump to search 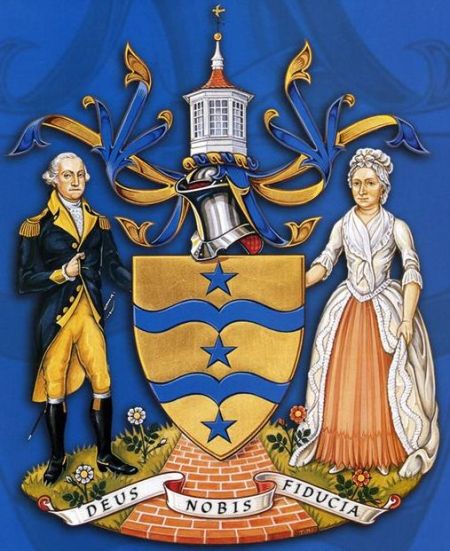 Arms: Or two bars wavy each composed of two troughs and one wave, the wave invected of one point on the upper edge and engrailed of one point on the lower edge between three Mullets in pale Azure.
Crest : Upon a Helm with a Wreath Or and Azure A representation of the Cupola at Mount Vernon proper mantled Azure doubled Or.
Supporters : on the dexter side a representation of George Washington habited in the uniform of an Officer of the American Continental Army and on the sinister side a representation of Martha Washington habited in an open gown Argent with terracotta petticoat proper and a cap Argent both standing upon a compartment comprising a brick Pavement between Grass proper growing therefrom on the dexter side two Roses with buds Argent stalked and leaved Vert and on the sinister side two Roses with buds Gules stalked and leaned Vert.
Motto: 'Deus Nobis Fiducia'.