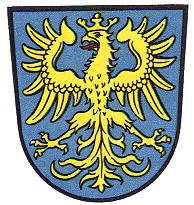 The arms were granted in 1841 and show the imperial eagle in different colours. The city was founded in 1276 by King Rudolf of Habsburg around a newly built imperial castle. All seals of the city, the oldest dating from the 15th century, show an eagle.

The eagle remained the symbol of the city, even when the city became a possession of Pfalz in 1330, of France in 1793 and of Bayern in 1816. The crown on the eagle was added in 1645, but at the same time the colours were a black eagle in a silver field. The present colours were first mentioned in 1786, their origin is not known.