From Heraldry of the World
Your site history : Gipping
Jump to navigation Jump to search 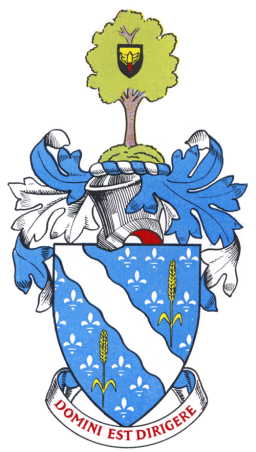 Arms : Azure semée of Fleurs-de-Lys a Bend wavy Argent between two Ears of Wheat slipped and leaved Or.
Crest : On a Wreath of the Colours on a Mount Vert an Ash Tree proper in the centre and pendent from the branches by a Riband Azure an Escutcheon Sable charged with a Leopard's Face Or.
Motto: 'DOMINI EST DIRIGERE' - It is for the Lord to direct

The blue background and fleurs-de-lys refer to the Blessed Virgin Mary, and indicate the great preponderance of parishes dedicated to her in the district. The ears of wheat allude to the two former rural districts combined into the Gipping Rural District - Bosmere and Claydon, and East Stow. The wavy bend represents the River Gipping.

The ash tree refers to the Ashburnham family and the leopard's face to the Wentworth and De Saumarez families, the latter also links to the arms of the East Suffolk CC.