From Heraldry of the World
Your site history : Glarus (canton)
Jump to navigation Jump to search 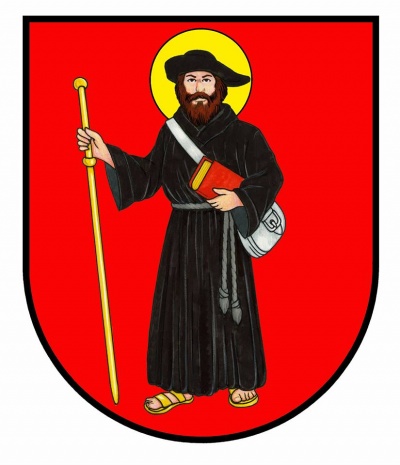 The arms of Glarus show St. Fridolinus, an Irish missionary, who travelled in (present) France and Switzerland. He founded a nunnery on a small island, which was later given by the German King to the city of Glarus. The saint also became the patron saint of the church in Glarus city. As this was for a long time the only church in the area, the saint became the patron saint of the whole district.

The oldest use of the saint in the banners or arms of the district dates from 1352 when Glarus joined the Swiss confederation. Some older seals show Maria and Christ. All later images, seals and arms show St. Fridolinus. The saint is, however, shown in many different shapes, sizes and is sometimes facing left, sometimes facing right, most often with a abbott's stick, but also sometimes with a straight stick. He is always shown with a bible.

In 1861 the arms were properly described by Ludwig Stanz. He showed the saint with a straight black stick, a red bible with golden lining, a green bag around his shoulders, black sandals with green laces.

The next official drawing dates from 1931 and is basically the same, including the green bag. The latter, for which is no historical evidence, was highly debated. In 1941 the arms were renewed; the stick became gold, the historical colour, the bag became silver as did the shoes.

The present arms date from 1959 and show a more modern-styled St. Fridolinus, with black shoes and a golden bible, which is in accordance to most historical images. The bag has also disappeared, even though it is seen on many historical images. The hands and face are now officially white, instead of natural colour.