From Heraldry of the World
Your site history : Godalming
Jump to navigation Jump to search 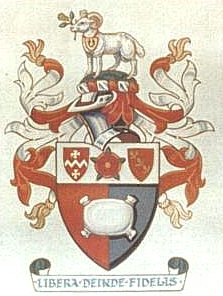 Arms : Per pale Gules and Sable a Woolpack Argent on a Chief of the last a Rose of the first barbed and seed proper between two Escocheons also Gules that on the dexter charged with a Fesse dancetty between two Crosses patty in pale of the third and that on the sinister charged with three Pears in bend leafed and slipped proper.
Crest : On a Wreath of the Colours a Mount thereon a Ram statant holding in the mouth a Pear leafed and slipped all proper suspended from the neck by a Ribbon Gules an Escocheon Or charged with a Pair of Shears erect points upwards also proper.
Motto: 'LIBERA DEINDE FIDELIS' - Faithful because free

The woolpack represents the traditional local clothing industry and is taken from the 18th century town seal. Centrally above it is a red rose as a reminder that the first charter was granted in Tudor times. The two shields, one either side of the rose, commemorate John Perrior, the first town warden, and Salisbury Cathedral which held the manor.

The crest is a ram, emphasising the town's early association with the wool industry and taken from the crest of the Clothworkers' Company.