From Heraldry of the World
Your site history : Gonville & Caius College (Cambridge University)
Jump to navigation Jump to search 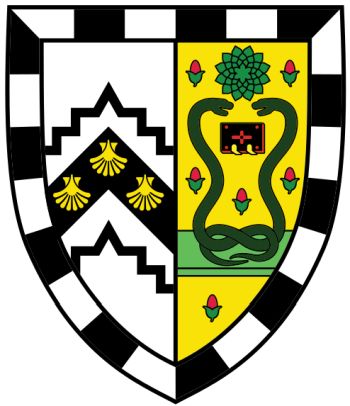 Arms: Argent, on a chevron between two chevronels indented sable three escallops Or, impaling Or, semee of flowers gentil, in chief a sengreen above two serpents erect and respecting one other all proper, the serpents' tails bound together and resting on a square stone of green marble in base, and between the serpents a closed book sable, edged gules clasped and garnished gold; all within a bordure compony argent and sable.
Crest: On a wreath of the colours, A dove argent, beaked and membered gules, holding in the beak by the stalk a flower gentil stalked vert.

Gonville and Caius (Keys) College, founded as Gonville Hall by Edmund Gonville in 1348. and re-founded by John Caius, M.D., in 1557 combine the arms of Gonville and Caius within a bordure compony argent and sable. The personal grant to Dr. Caius. dated 1560, states that the book betokens learning, the serpents and stone " wisdom with grace founded and stayed upon vertue's stable stone," and the sengreen and flowers gentil " immortalitie that shall never fade."