From Heraldry of the World
Your site history : Grand Lodge of Mark Master Masons
Jump to navigation Jump to search 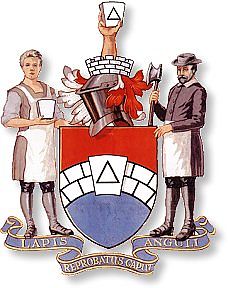 Arms : Per fesse gules and azure, in fesse an arch argent, masoned sable, the keystone charged with an equilateral triangle of the last.
Crest: Issuant from a mural crown argent, masoned sable, a cubit arm proper, the hand grasping a keystone also argent charged with an equilateral triangle also sable.
Supporters: On the dexter side a craftsman habited proper holding in the exterior hand a keystone argent and on the sinister side a warden habited and holding in the interior hand an axe proper.
Motto: Lapis reprobatus caput anguli

If you have any information on these arms Lodge of Mark Master Masons mail us !