From Heraldry of the World
Your site history : Grantham
Jump to navigation Jump to search 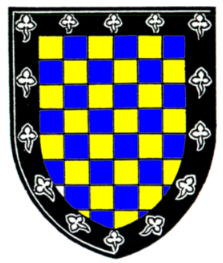 Chequy Or and Azure a Bordure Sable verdoy of Trefoils slipped Argent.

The arms were officially recorded at the Visitation of 1634.

The arms are derived form the arms of the Warennes family, who played an important role in the local history. The trefoils are likely to be a local symbol.